In the UK, the Disclosure and Barring Service is a public body which comes under the Home Office. It’s the job of the Disclosure and Barring Service (DBS) to help employers across all types of businesses recruit staff safely. They do this by looking into the backgrounds of people applying to work or volunteer in the private or public sector to make sure they are suitable. Usually, these are people wanting to working with vulnerable adults or children.

The DBS came into being in 2012 when the former Criminal Records Bureau (CRB) merged with the Independent Safeguarding Authority. (ISA). The DBS started work in later 2012 from its offices in Liverpool and Wiltshire. The DBS only operated in England and Wales. In Scotland, the equivalent agency is Disclosure Scotland. In Northern Ireland, it’s called AccessNI.

In many occupations in the UK, known as “regulated activity”, employers are legally required to tell the DBS if they fire someone or they leave because they have harmed or injured someone. If someone has been listed as barred by the DBS, they are committing a criminal offence if they apply for those type of jobs in the future. It’s also a criminal offence to employ someone if you know they have been barred.

Employers who want to run DBS checks on their employees have to register first with the DBS. The DBS will check that the employer is entitled to ask those sorts of questions to applicants. People applying for a DBS check first complete their form, and have it countersigned by someone from the body which has previously registered with the DBS. The DBS then accesses the applicant’s criminal record (if there is one), and checks their details against central lists of people who have been barred from work with vulnerable adults or children. After the checks are complete, the DBS prints off a certificate and sends it to the home address of the applicant.

Organisations and individuals also have the right to raise safeguarding concerns with the DBS. If a safeguarding referral is made, the DBS then looks at evidence from various agencies to decide whether the person needs to be formally Barred from working in “regulated activity” in the future. 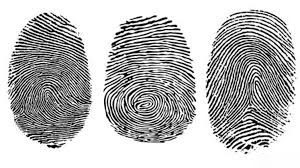 History of the DBS

The predecessor of the DBS was the Criminal Records Bureau, or CRB. The CRB was set up in the Police Act of 1997 and started operating in 2002. The CRB was established after several high profile criminal cases involving the safety of children and adults classed as vulnerable. At the time, UK Police Forces didn’t have an effective way of processing criminal records checks quickly, so a specialist body was established. Since the DBS has started operating, there have been criticisms over the time it can take to get certificates returned to applicants.

And adult version of the same barred list was started in summer 2004. After a few name changes, it finally became known as DBS Adult First. These two lists make it easier for registered bodies to check online whether an applicant is barred. It only takes around two days to make these types of check. Applicants can then start work, pending the full disclosure certificate arriving in the post.

In 2013, the DBS introduced an Update service. This was intended to make it easier to apply for checks and make things cheaper too.

In 2009, the UK government’s Home Office introduced a series of measures to improve safeguarding. The programme aimed to cut costs by encouraging applicants to use the Update service and relieve pressure on the system. Although the Home Office expected almost 3 million people to subscribe to the service, the uptake wasn’t as high as expected and there are currently only around 1 million service users.

The DBS service is also going through an extensive modernisation process. The project is running three years behind schedule. There is no data about how effective the Update service is in stopping people working with children or vulnerable adults. 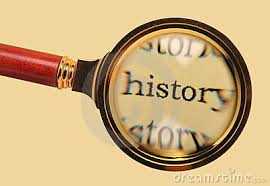 The Disclosure and Barring Service send out certificates to show criminal record data. There are three different levels of checking, called Standard, Enhanced and Enhanced with Barred List Checks. These types of checks can’t be requested directly by a member of the public. There is a list of occupations set out under the Rehabilitation of Offenders Act which require DBS checks. Only people applying for those jobs can legally have DBS checks done. The DBS launched their Update service in 2013. This is a subscription service which costs £13 per year. The Update service was designed to make it easier and quicker to apply for checks. Update subscribers can use their certificate more than once as long as the level is the same. Update also gives the employer the ability to log into a database and check current Disclosure information, with the applicants’ consent. At the start of 2018, a new Basic Disclosure was introduced, which is a statement of any unspent cautions and convictions only.

A basic DBS check is the least detailed type of check. This type of certificate shows convictions, legal warnings, reprimands or cautions as long as they are considered “unspent” under the terms of the 1974 Rehabilitation of Offenders Act. In England and Wales, this type of check is run by the DBS. In Scotland, Disclosure Scotland provide a similar checking service. Applicants can ask for this type of check online. Employers have to specify which level of check is required for each job they advertise. The idea behind the introduction of a basic level of checking is that it will cut down on employers asking for standard or enhanced checks which are unnecessary. 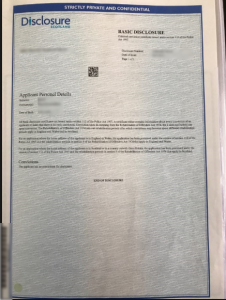 A Standard DBS check shows slightly more detail than the Basic DBS check. This is the sort of check which is needed for people who want to work in positions of responsibility in the finance or security sectors, among others. A standard DBS check only shows details of criminal records which haven’t been filtered. The filtering process removes certain items from a police record after a set period of time. This depends on how long ago the offence was committed, how serious it was, and how old the person was at the time. The most serious offences are never filtered from a DBS check record. Standard DBS checks can only be run if the job qualifies under the Police Act of 1997. Full lists of occupations and circumstances needing a standard DBS check are available online. 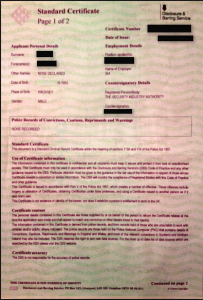 An enhanced DBS check is more detailed than both the basic and standard check. If you are applying for a job teaching children or caring for adults in hospital, this is the sort of check you will need. Enhanced DBS checks are also needed for other types of jobs, such as working in the criminal justice system, or being a RSPCA officer. Employers can only run enhanced DBS checks if the job role is specified in the relevant legislation. An enhanced disclosure certificate shows all of the information on a standard DBS check. In addition, the police look at any other intelligence or information they might have about the applicant, whether or not it has resulted in a conviction or caution. The police use their own framework to decide what information they should put on an enhanced disclosure certificate. As intelligence can be held by local police forces rather than on the Police National Computer, an enhanced disclosure check often takes longer than other types of checks. 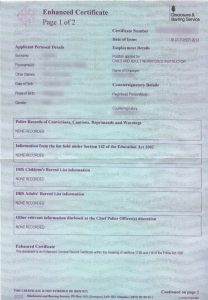 The final level of checking is the Enhanced disclosure with Barred list. This certificate shows everything which would be included on an enhanced check, and also includes a search of the DBS Barred Lists. The DBS holds two barred lists, one for people barred from working with children, the other from adults. People may appear on one list, or on both. Employers are only allowed to request a search of the barred lists if the job falls into one of the categories set down by the law. This includes works defined as “Regulated Activity” under the Safeguarding Vulnerable Groups legislation of 2006. Most often, this includes working closely providing personal care to children or vulnerable adults but could also include work in something like postal work, where employees have access to sensitive documentation.

In the middle of 2013, the DBS started to filter out some information from DBS certificates. The rules for doing this were set down in the amendment of the Rehabilitation of Offenders Act which came into force in 2013.

The government set down targets for processing times for DBS checks and the accuracy of the certificates produce. Details of how police forces are performing against targets can be easily found online.

Plans were in place for the Criminal Records Bureau (CRB) to merge with the Vetting and Barring Scheme in 2009. After the General Election in 2010, these plans were shelved pending a full review. The review was finally published in February 2011. The government review recommended merging the CRB with the Independent Safeguarding Authority to form the DBS. The DBS would be the one body responsible for completing police checks and keeping the lists of barred people. You don’t need to register to join the DBS, and information isn’t stored centrally on a database.

The CRB had come under intense scrutiny after the Soham murder trial in 2002. A former school caretaker had been found guilty of murdering two pupils from the school where he had worked. During the trial it emerged that the accused, Ian Huntley, had been investigated by the police for a range of serious offences including rape. However, as his only conviction was for driving without insurance, this was the only thing disclosed on his CRB check. As a result of this case, the CRB process was changed to require an enhanced check on all people working in schools, including asking for the “intelligence” held on computers which might raise concerns about a potential employee.

Concerns have also been raised by sociologists about the fact that a CRB or disclosure check cannot provide a guarantee of complete safety for a child with any given adult. There are also concerns that the extensive use of disclosure checks in creating suspicion and leading to many ordinary people finding themselves considered as potential abusers. Several voluntary organisations, such as the Guides, have said that CRB restrictions have meant a rapid decline in the number of adults coming forward to volunteer with the organisation.